What Companies Knew About Asbestos Poisoning

The asbestos industry caused a great amount of pain to many families by ignoring the startling evidence that asbestos exposure is harmful and often deadly. All of the suffering could have been avoided because the asbestos companies knew a lot more than they informed the public about. It is hard to explain how these companies considered the protection of the industry more important than the lives of their workers.

Video: The Evil Dust: the history of asbestos, an excerpt.

Back in the 1920s, a large variety of medical articles showed that there was scarring on the lungs of asbestos factory workers. This evidence was revealed during autopsies of those workers. Asbestos companies had full knowledge of these articles, but chose to ignore the facts presented because the public reaction to such information would kill the asbestos industry. Further studies in the 1930s revealed that asbestos miners and factory workers were indeed dying of lung disease and cancer.

There was enough evidence to support an undeniable correlation between asbestos poisoning and the development of mesothelioma. Sadly, the companies decided to suppress this overwhelming evidence and in a series of letters between asbestos companies. In these same letters, executives revealed how far the companies were willing to go in order to protect their own interests. These letters that were circulated in the 1930s are called the "Sumner Simpson Papers." In these letters, certain asbestos company executives made statements such as "the less said about asbestos, the better off we are." Owens Illinois and Owens Corning Fiberglas conducted studies in the 1940s, attempting to prove that asbestos exposure was harmless, and save the asbestos industry. The studies revealed the exact opposite. They showed that exposure to asbestos was indeed quite harmful and even deadly. In light of the studies, the companies attempted to force scientists to change their conclusions. 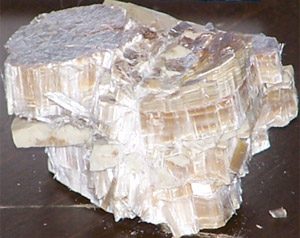 Photo: Chrysotile or white asbestos is the most commonly encountered form of asbestos.

Asbestos companies had full knowledge of the potential harm that could be caused by exposure to asbestos. Scientists and studies confirmed that there was a direct relationship between asbestos exposure and early death. Asbestos companies first tried to cover up the knowledge and silence scientists who conducted studies showing the harmful effects of asbestos exposure.

Once the information about asbestos came to the public, these same companies attempted to deny having knowledge that people simply working around asbestos-containing products would suffer. The companies denied knowledge in order to avoid lawsuits. The simple fact is that asbestos-containing products cause serious injury and often lead to premature death. For this reason, mesothelioma lawsuits are quite valid and are in no way frivolous. Lung disease, lung cancer, and mesothelioma all stem from asbestos exposure. Many lives could have been saved if the asbestos companies were willing to release the information that they had access to.

Robert Linebaugh writes about a variety of health topics, but focuses on mesothelioma.